The time has finally come! After weeks of nominations and voting here and at stark.raving.mad.mommy., we are finally ready to unveil the Top Ten Douchebags of 2010! The competition was fierce. Apparently being a Douchebag has replaced baseball as America’s past-time. And there were so many way to excel in douche-o-metrics this year: sexting, famewhoring, and polygamy are a few favorites, as are plain old-fashioned bigotry and bullying. The douchery isn’t limited to the very famous; even an ordinary mother from Michigan or a redneck from Arkansas can make the list if they just douche it up enough.

10. Kate Gosselin. Between the Dancing with the Stars debacle, and the upcoming Camping Crossover with Sarah Palin on TLC, Kate Gosselin has had a very busy year indeed. Interestingly, Kate and Jon Gosselin were neck-and-neck at one point in the polling, and I really thought Kate might win out. After all, Jon Gosselin appears to be fading into the Ed Hardy-patterned woodwork, while Kate is famewhoring her kids at every. possible. opportunity. SRMM

9. Kody Brown: Oh Kody. The polygamist everybody loves to hate, Kody rose to fame when he and

his three wives, one fiancée and eleventy-bazillion children debuted on TLC. His main defects are his hair, which is a cross between a Muppet and a midlife crisis, his two-seater Lexus that he drives around while his wives’ cars have duct tape on the windows and, oh yeah, THE FACT THAT HE THINKS HE’S SO SPECIAL THAT HE SHOULD BE ALLOWED TO BOINK AS MANY WOMEN AS HE WANTS. Kody is not only married to more than one woman, he’s insensitive to more than one woman, leaving them to wallow in their jealousy and depression while he cavorts with whichever wife strikes his fancy that day.  We strongly suspect that Kody’s douche-ness leaves a trail of vinegar scented vapor following him from room to room in his polygamist compound.  MIAM

8. Kanye West. Kanye West had several douchetastic moments in 2010, including a a bizarre mini-feud with Matt Lauer of the Today show. For me, the pinnacle of his douchiness was replacing most of his bottom teeth with diamonds. He also just couldn’t seem to shut up about stealing Taylor Swift’s spotlight at the 2009 VMA awards.  He finally issued an apology in November of this year, but also complained that Swift never came to his defense in any interviews. Whuck? She was supposed to defend him for being a douche? SRMM

7. Jesse James: Jesse James had it all. He had a tv show. He has gorgeous kids and his legal

battles with their mother appeared to be at an end. He had Sandra Bullock and they were adopting a beautiful baby together. So what’s the next logical step? Do the nasty with a tattoo model, duh.  Jesse’s little extra-curricular romping with his skankalicious flame brought out in sharp relief what a class act America’s Sweetheart is. Sandra took her infant son and quietly divorced Jesse without a word to the press.  Jesse, I suppose, has his ink to keep him warm because he sure doesn’t have Sandra Bullock or any of her fans showing him the love. MIAM

6. Jon Gosselin. The fact that his wardrobe seems to be consist exclusively of Ed Hardy shirts speaks volumes. Say what you will about Kate Gosselin dragging her family through the limelight, but this guy let it happen. And there’s no denying that he seemed to enjoy the hair plugs and personal trainer he acquired as part of Jon and Kate + 8. In 2010 he enjoyed a string of different (young) girlfriends, including the 22-year-old daughter of Kate’s plastic surgeon, a 25-year-old snowboarder, and most recently a 24-year-old who refers to herself a “stepmom” to the eight children. However, Jon Gosselin seems to be closing the year out on a positive note: he finally has a real job. So this honor may be more of a Douche Emeritus position after years of douching it up on reality TV. SRMM

5. Tiger Woods: Tiger got to start 2010 in rehab for Doucheness. After the cascade of events that closed out 2009 for le Tigre,

starting with rear-ending his own tree and ending with sexts that made the whole act of sexting seem gag-worthy, Tiger had nowhere to go but therapy. In the spring he held a press-conference to try and apologize but it appeared that he hired an animatronic version of himself to stand there and recite the tritest apology ever. America didn’t buy it and neither did his wife who took the Sandra Bullock route and divorced him without ever granting an interview about it. MIAM

4. Mel Gibson. When I first lived in South Philly, there was a guy on my block who walked around in his jammies with a stuffed cat in his arms. I was told that he collected Social Security Disability Insurance “gets the crazy check.” 2010 was the year that Mel Gibson slipped from “collecting the crazy check” to “I can’t believe no one has had him committed yet.” Let’s face it. We already knew that Mel Gibson was a racist and an anti-Semite. 2010 brought us the knowledge that he is a raging (and we do mean raging) misogynist. His girlfriend and babymama Oksana Grigorieva recorded Gibson ranting at her, using horrifying phrases like “you look like a pig in heat, and if you get raped by a pack of … it will be your fault.” He also threatened her with “I’m going to burn the f—ing house down, but you will [perform oral sex on me] first”. Personally, I can’t wait for this guy to do jail time. Because he’s so pretty friendly, I bet he’ll make some really nice friends in jail that will help with his anger issues. SRMM

3. Sarah Palin: After her exit from the world of politics when she quit being governor of Alaska, Mrs. Palin found herself with

lots of free time to explore the many avenues of douchity available to a moderately attractive woman with a Fox News contract and a ghost writer. Whereas other ex-politicos hit K Street to wield real influence in policy arenas, our girl Sarah took another route: the route that leads to putting her kids on reality tv for their high-school classmates to watch and mock on Facebook. Because we all know that teenagers are soooooo reasonable and not likely to abuse their classmates for appearing on a tv show where their mom trots their purported family values around like a rotting caribou carcass. Poor Willow Palin took some heat from her classmates and then took heat from the whole damn blogoshere when her angry reaction made news.  A good mother would have come to her senses right about then and told TLC to pull the plug. Sarah did nothing of the sort.  Her fame-whoring continues, unabated by concern for her kids. MIAM

2. Clint McCance. Clint McCance was the Vice-President of Midland School District in Pleasant Plains, Arkansas when he posted an anti-gay tirade on Facebook because his school district was planning activities to support anti-bullying efforts after a rash of teen suicides. McCance stated that he wanted gay people to commit suicide, and said he enjoyed “the fact that [gay people] give each other AIDS and die.” When a friend commented that it was un-Christian to speak so hatefully about other people’s families, McCance responded, “I would disown my kids if they were gay. I will absolutely run them off. Of course my kids will know better. My kids will have solid Christian beliefs.”

Before resigning, McCance apologized and said that he “would never support suicide for any kids,” and that he doesn’t “support bullying of any kind.” Huh? In the words of George Takei, “Mr. McCance, you are a douchebag.” SRMM

You’re 2010’s Biggest Douche.  See you on Jerry Springer and/or in Hell. 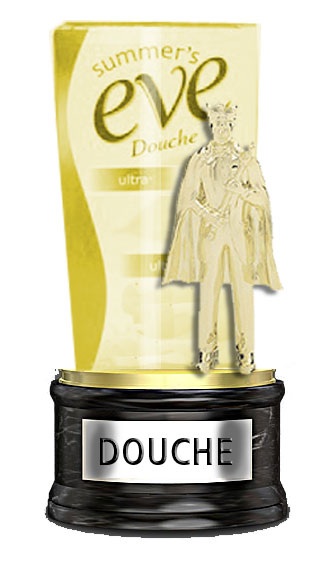 Special thanks to Amy from PregnantChicken.com for the amazing Douche Trophy graphic.  Have you seen Amy’s latest post?  It’s full of douchetastic pregnancy portraits.