Sadly, there were no Ochocincos at my grocery store but there were some other real gems on the shelves.

First we have the WhoTF version of Wheaties with a man, who is probably a famous athelete but I can’t identify him on sight or read his autograph,  peering ominously at you from the shelf. The glare he’s giving is similar to one I’d give before coffee but still not what I want to confront over the breakfast table.

If you need to be reminded of our own adulthood we have cereal that is high in fiber and also has Suze Orman on the box. I guess so you can be catapulted into a whirlwind of stress about you kids’ college fund before 8am. Panic and adrenaline are the new caffeine. 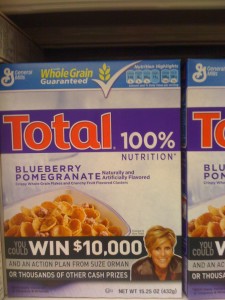 If you don’t feel like coming face to face with all your inadequacies as a financial planner or blowing out your colon before lunch with high fiber cereal you can have dessert. I know these are supposed to be breakfast food but really? Who are they fooling?  Moreover, what parent in their right mind buys these for their kids? The sugar high from this stuff would send most kids into orbit. 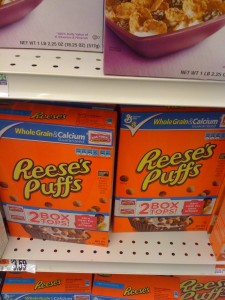 Now, we all know candy is bad for kids first thing in the morning but cupcakes are different, right? Right? Also, what acid was the box designer dropping?

But those brand name cereals are sooooo pricey. You can save money and still send your kids into sugar orbit with store brand cereal! The save you money by employing marketing staff who never learned to spell. 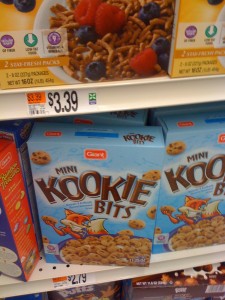 Now, this last cereal got me kind of excited and also a little scared. I mean, what could possibly be the ingredients list for something called Science Experiments???? 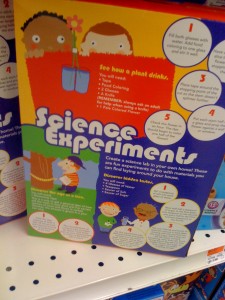 Well, joke’s on me. Those boxes were turned backwards. Instead of selling science, that cereal is really selling Gay Pride. 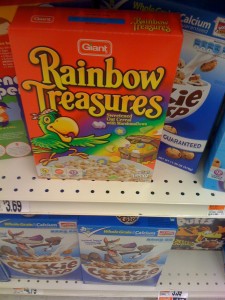 Do I even need to tell you that all I bought for breakfast this week is bacon?

← C’s Bookshelf: Tuck Me In and Green Eggs & Ham (Contest Opportunity)
Funny Video: Look at Grover! Look at Your Man! →

14 comments for “Cereal That Makes You Go WTF?”