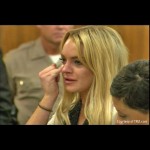 First of all, go get some nail polish remover, wipe that cuss word off you middle finger, and then get your pathetic butt back here so we can talk.

Thank you. Much better.

Lindsay, I’m going to talk to you like I’m your mother because you need a verbal beat-down from a real mama in the worst way. Your mother is a worthless fame whore and you should never, ever, ever listen to a word she says. There have been days when I have wondered what reason I could cite over the phone to CPS to get them to do a little drop by and make your moonbat mama puts some damn pants on your baby sister. She’s going the skantastic route and needs to be stopped before she and Miley start their own line of clothing that stops just north of the crotch. Don’t be giving me the whole “My mom supports our dreams” garbage. Your mom supports HER dreams. She sucks as a parent. A good mother, when told by a child that she wanted to be an actor, would have enrolled her in a community theatre acting class, let her be in a middle school production of Oliver and maybe sent her to dance camp. She would not get on the horn to Disney and prepare to fling her child into the spotlight. 18 is plenty old enough for spotlight flinging and your mama should have known better.

But. Dina didn’t give you the childhood you deserved and your dad sure as shootin’ didn’t do a damn thing toward raising you so here we are. And Lindsay? Here is not good.  Here is actually lock-up. You’re headed to jail. And I gotta tell you, I think it’s long past time you had a little “time-out” to think about your misbehavior. That’s another thing a real mom would have done for you when you were young: she would have put you in the Time Out Chair for 5 minutes and had a long talk with you about how you were acting. She would have provided boundaries so that you would have known how not to careen wildly out of control. But she didn’t so the State of California is doing it now and instead of having quiet time and a stern conversation, you’ll be showering with a lot of women who have never been in a movie but probably had equally appalling parents.

Lindsay, look, I know.  I know you had hard times.  I know going from freckle-faced sweetheart to grown-up gay girl when Hollywood expects pretty young things to hook up with Taylor Lautner-types is hard. When I first heard rumors about you and Sam Ronson, I thought “Ahhh!  That’s it! She’s having trouble finding her way out of the closet!  Maybe once she gets a handle on her sexuality and learns how to take strength in joining the ranks of great women like Ellen and that girl who was in Roseanne and my friend Jenny, she’ll be able to stop shutting down her consciousness with drugs!” Only you didn’t.  You didn’t get all the way out of the closet. And you didn’t get into a good relationship with a nice girl. You just spiraled around and around in frantic circles while the paparazzi looked on with glee.

You needed to get behind closed doors then and you need it now. You don’t need to make more movies. You sure as hell don’t need to go to more events and parties. You need to do you 90-day time out then go home. Maybe take a pottery class.  Or better yet, go to college.  Maybe Smith? Lots of pretty girls for you to date there. Not that you should be dating.  You should be learning about you. Seriously, what do you like?  Do you like acting? Maybe you’d prefer physics or sociology. You never got to go to high school and college and figure all of that out but you can still do it. You don’t have to be part of Hollywood and I would say you shouldn’t be part of Hollywood because it’s literally killing you. Yeah.  I said it. What you’re doing? Is going to kill you. Think I’m exaggerating? Two words: River Phoenix.

You have choices now, Lindsey.  Make the right ones.

P.S. Cool it with the lip filler. Seriously, your lips look like Snooki.

14 comments for “Letter to Lindsay Lohan”