Yesterday, I bought a copy of Life and Style magazine on my way home because it had the tantalizing combination the Kardashian who just had a baby and Kendra from The Girls Next Door on the cover.  Woohoo!  E! Network baby-mama drama! Hook me up with some of that good stuff! 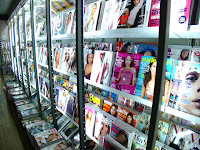 (Note: This is the third glossy gossip magazine I’ve brought home in the past week.  I think the Great Guy I Married is starting to wonder what happened to the nice smart girl he met a few years back who had just finished grad school and read serious things like the newspaper.  And I’m all like “Hel-lo!  These magazines are research materials!  All the bloggers write about important happenings in pop-culture and if I don’t do it too they’ll know I’m not cool and fall asleep too early to even stay current with Millionaire Matchmaker which is the most brilliant tv show ever! Now please stop silently judging me because there are Kardashians for me to keep up with on the DVR.”)

(Actually, I don’t think my husband really judges me but he does smile indulgently when he catches me reading magazines about reality tv stars and that makes me judge myself.)

Anyway this magazine had Kendra on the cover and it said she wanted a boob job.  Boob job!  She already had a boob job, as I know from watching The Girls Next Door religiously when the first set of Girls were still on it.  I couldn’t stand the second set of Girls.  Those twins?  Stupid, vapid, irritating, and they had voices that annoyed me.  And the fact they they slept in the same bed, with or without Hef, freaked me out. But the first set of Girls were addictive.  I was all “Team Holly!”, or would have been if people had been choosing sides and picking favorites.  Bridget was ok but her habit of dressing up in weird costumes got a little old.  Holly had style and a wicked sense of humor that popped out sometimes and surprised me.  And I cheered for her when she left Hef because she wanted a husband and family and not to be the perennially perky platinum blonde to escort Hef through his twilight years.  I really wanted her to move on and grow past her reliance on the strange infantilized and untouchable sexuality that Playboy engenders.  It’s this sort of “aw-shucks-I’m-a-pretty-young-thing-and-WHOOPS!-my-boobs-popped-out-giggle-are-you-looking-at-them-you-silly-boy?” brand of sexiness and it’s actually pretty gross if you think about it. Give me Madonna or Lady Gaga really owning their sexual bizness and daring you to make an issue of it over the Playboy ideal, any day.

Anyway, I was never a big fan of Kendra because she was so ditsy that I could hardly stand to listen to her but I kept watching because I always thought she might be gay and watching her figure that out would have been entertaining.  Apparently she’s not gay (or is gay and still hasn’t noticed) because she got married to a football player and had a baby.

Two months ago.  She had a baby two. months. ago.

Remember what you looked like when your baby was two months old?  If you were like me, you were running around in maternity pants and a zippered hoodie thrown on directly over an orthopedic-looking nursing bra, no shirt in-between.  Your hair might have been washed in the past few days but it was certainly not styled and you probably had roots showing.  Make-up?  You couldn’t spell make-up.  And your body? Let’s not even discuss your body.  No one needs to relive those memories.

Which is why I LAUGHED OUT LOUD when poor, dumb, ditsy, maybe-gay Kendra said that after two months of focusing entirely on her baby she finally looked in a mirror and was all like “Ahhh I don’t look all hot like an 18-year-old Playmate who never had a baby!” (not an exact quote).

Um, Kendra?  DUH. Life lesson for you: when you ditch the condoms, you also ditch your waistline.  It’s true.  Making babies also makes for changes to your body that you can’t really undo.  Oh, you’ll still have all the same parts you had before, but nothing is going to be where you left it before you got knocked up. It’s hard to accept and you’ll find yourself desperately shopping for new pants that are shaped more like you and less like the ideal figure as determined by the apparently-childless sadists at Banana Republic who don’t believe in hips, but it’s a Fact of Life and the sooner you learn to deal with it. the happier you’ll be. And for the love of all things healthy and normal please, please, please don’t go out and get all kinds of plastic surgery to erase the results of pregnancy.  Please! The women who do that and look relatively unscathed by their forays into perpetuating the human race?  Are freaks who serve no purpose than to make those of us who can’t afford plastic surgery because we need to pay for food and shelter think getting plastic surgery to hide the results of procreation is immoral feel bad about ourselves. You look pretty damn good and you’d look even better if you loved on your new body the way you used to love on Hef. ‘K? ‘K.

Now, if you’ll excuse me, I have 4 hours worth of Millionaire Matchmaker on my DVR to watch.

7 comments for “Well, YEAH, I want to look like a Playmate too but….”