Every spring, DC boasts of one the most beautiful natural phenomena on the eastern seaboard: The National Cherry Blossom Festival.  Cherry trees, many of them gifts from the government of Japan, rim the Tidal Basin near the National Mall and each spring they burst forth in a kind of pink glory unrivaled by any Disney Princess.  It is a wonder to behold and I highly recommend finding pictures of the event and looking at them.  I do not recommend going to the Tidal Basin to see them up close because the whole place is wall-to-wall people, most of them stopping mid-step to try and gt a picture of their children posing under a cherry tree and the experience basically sucks. The trees are pretty though.  Seriously, google them.  You won’t be disappointed.

One of the lesser known addenda to the Cherry Blossom Festival is the Smithsonian’s Kite Festival.  Every year, on the first day of the Cherry Blossom Festival, the Smithsonian invites anyone who wants to to come out to the Mall near the Washington Monument and, literally, fly a kite. They host demonstrations of really fancy kites, they have kite-making crafts, kite clubs (who knew there was such a thing?) come and show off their kite flying skills, and there’s music and general festivity.  But mostly?  It’s hundreds of people on the Mall, flying kites. 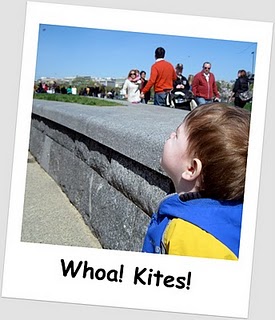 I have to say that whoever thought this up was a genius because the National Mall is really just begging people to fly kites there.  It’s a wide, flat space with no trees in the way and plenty of space to stay out of the way of other kite flyers.  Even Charlie Brown probably could have launched a kite there if the wind was right (I can’t say he could have kicked a football there because Lucy was really never gonna let that happen, now, was she?).  So it’s really no surprise, that when you approach the Kite Festival, you see a sky full of kites.

I wasn’t sure how interested C. would actually be in just looking at kites in the sky because I had been too slack to invest in our own kite, but given his fondness for other flying things like airplanes and helicopters, it wasn’t too much of a gamble to say he’d get some passing enjoyment out of it. I was pleasantly surprised at how into the kites he was once we got there.  It probably helped that one of the kites there was a GIANT soccer ball that the owner was allowing kids to touch.  He made a beeline right for that.  But even the kites that weren’t enormous flying sporting equipment kept his attention.

One thing I learned today while looking at the many different kites around me is that kite technology has come a long way since I was a kid.  No more paper and plastic that rips the first time the kite hits the ground.  These are all fabric and absolutely gorgeous (Except for the ubiquitous character kites.  Must Dora’s face be everywhere?) 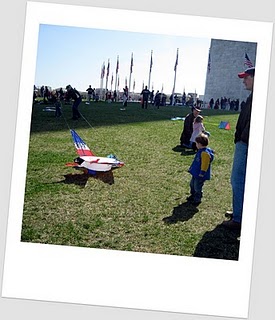 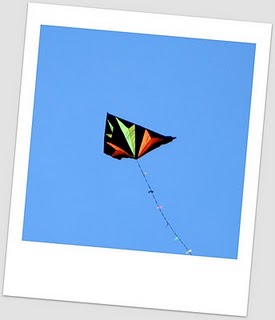 Next year, C. will need his own kite to really round out the experience.  But for now the kites are fun to look at and a nice alternative to fighting crowds around the cherry blossoms.

← Update on E., the little girl with cancer
Write for Charity →