Usually, the evening routine is pretty simple.  I pick C. up at daycare, he demands a banana which I produce immediately, often after buying a banana for the ridiculous sum of $1 from Au Bon Pain on my way to get him, we hit the metro, and go home.  He likes the banana and the trains, I like keeping him happy, the day ends without drama.

I messed with it a little yesterday.  The Great Guy I Married got done with work early enough to meet us at the metro so there was some waiting around time between the banana and the train ride.  Not a lot of time.  Just enough for C. to decide life wasn’t worth living if he didn’t get some juice.  And of course, I had no juice. So I resorted to bribery.  I told C. that if he could hold on until Daddy got there we could run to the Corner Bakery in the station and get chocolate milk for the ride. It worked: he stopped whining until daddy arrive then picked right up where he left off.

The three of us booked it over to the Corner Bakery and I snagged one of those single serve Horizon chocolate milk boxes from the cooler and headed to the register while C. whines escalated to wails behind me.  There were two people in front of me.  A lady finished her transaction and went on her way, probably grateful to escape the siren-like noises my son was emitting. The man right in front of me, we’ll call him Mr. Nice Man, looked back and said “You go ahead.  I know what it’s like.”

I stuttered a thank you and paid while simultaneously piercing the milk box so I could shove the straw in my son’s mouth and make the noise stop.  Mr. Nice Man said “I’m putting some karama out there for next time it happens to me.  I have twins.” 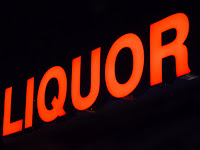 “Well, thank you.  I’ll pay this forward for you and have a great weekend.”

So, in honor of Mr. Nice Father of Twins Man, I solemnly swear to let the next parent of a whining child cut in front of me in line in the hope that one of you will do it for him.

← This could happen to me
Quest for Mommy Blog Dominance →