I’m not totally sure how today is going to shape up.  The cause of my unease?  I’m only 80% certain I remembered to put deodorant on this morning.  Sure, I have a travel size deodorant in my desk for just such occasions but it’s the principle of the thing.  If I’m forgetting to sanitize my pits, what could be next? It’s tempting, on mornings like this to declare immediate defeat and discard all the trappings of Responsible Adulthood and just have Cheez-Its and Cadbury Caramel Eggs for breakfast. (Yes, I found some caramel eggs!  I restrained myself from doing an Elaine Bennis-style happy dance in the aisle of CVS then bought four of them.).  But I have a deep sense of foreboding that I will really need those eggs later in the day after my boss asks me for the 800th time if the room for the event we’re doing on Friday has a microphone in it.  For some reason events make him really nervous and he fixates on potential a/v disasters in the lead-up.  I have a long and storied history of not permitting a/v fuck-ups at events I manage but this never stops my boss from asking over and over again if there will be a working microphone in the room.  I don’t know if he’s afraid I’ll lose the plot and forget to get a microphone or if he’s so confident in my abilities that simply hearing me say “Yes, Boss, there will be a microphone” is enough to assuage his concerns.

But none of that is really the point.  The fact that I just wrote a whole paragraph about breakfast and my boss actually underscores the greater problem I’m facing: my blog is in danger of becoming boring because my life is pretty boring.  I go from home to metro to work to daycare pick-up to metro to home every. single, weekday. On weekends I scrounge playdates, juggle errands and flail around the house with a Swiffer duster and a vacuum cleaner. Which is why I don’t have the wealth of material that my blogging idol Jen Lancaster of Jennsylvania has.  She actually leaves her house, interacts with people, has experiences, and recounts them with enormous humor.

So Mama’s gonna git up offa that thang! I herefore declare that I will plan at least one adventure every weekend and then write about it!  Sound the trumpets and let the frolic begin! Da-da-daaaa! 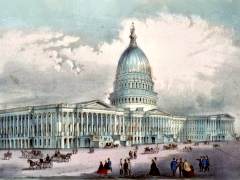 Of course, the problem is that I’m basically broke most of the time because of the strictness of my recreation budget ever since we took on a mortgage. The good news is that we live in the DC area where there is a ton of family-friendly free stuff going on.  The bads new is that millions of other people who live in the DC area are also staggering under the weight of their mortgage payments and also want to do free stuff. Add to the mix the zillions of tourists who arrive in DC and thrill to the sound of free stuff and what you have is a recipe for crowds.  I hate crowds.  I hate them so much.  I would leave DC in the summer-time when the crowds are worst if I could.  I don’t know what the problem with DC area tourists is but they completely lose their grip on basic life-etiquette rules like Don’t Block The Top Of The Escalator To Photograph the Capitol, I Don’T Care How Good The View Is. My theory is that they DC is a living history display like Williamsburg only instead of actors who dress like Colonial butter-churners and blacksmiths, we are all actors dressed like lobbyists, federal employees, and harried mothers trying to get to daycare at 5:30pm so it’s ok to get in their way since they’re not real people or anything.

But I digress.  If I’m going to get out of my rut and also not break my budget, I’m going to have to get over my crowd issue.  And I’m going to start this weekend by taking my son to the National Air and Space Museum.

Meanwhile, I need to go reassure my boss that there will be a microphone in the room at Friday’s event.

P.S. Anyone got ideas for free or cheap family adventures in the DC area?  Thanks!

← This post uses the word “penis”.
Six Degrees of Mommy →